It’s the end of an era for Dancing With The Stars.

Cheryl Burke announced she’s leaving the hit dance competition show as a pro dancer after the season 31 finale that’s set to air on Disney+ on Monday.

The San Francisco native has been a mainstay on the show for most of the seasons since she made her debut in season two, which premiered on ABC back on January 5, 2006.

Hinting at tension behind the scenes, she said show bosses had been ‘well aware’ for years that she wanted to be promoted to the judging panel, but had ignored her pleas.

She made it known she’d like to replace head judge Len Goodman following his departure at the end of this season, but said she was weighing up other opportunities too.

‘I am sitting here full of so many conflicting emotions about the words I am about to write,’ she began when announcing her decision on Instagram. ‘Tomorrow night will officially be my final dance as a pro dancer on @dancingwiththestars. This has been one of the absolute hardest decisions of my life & I am also confident that it is the right one.’ 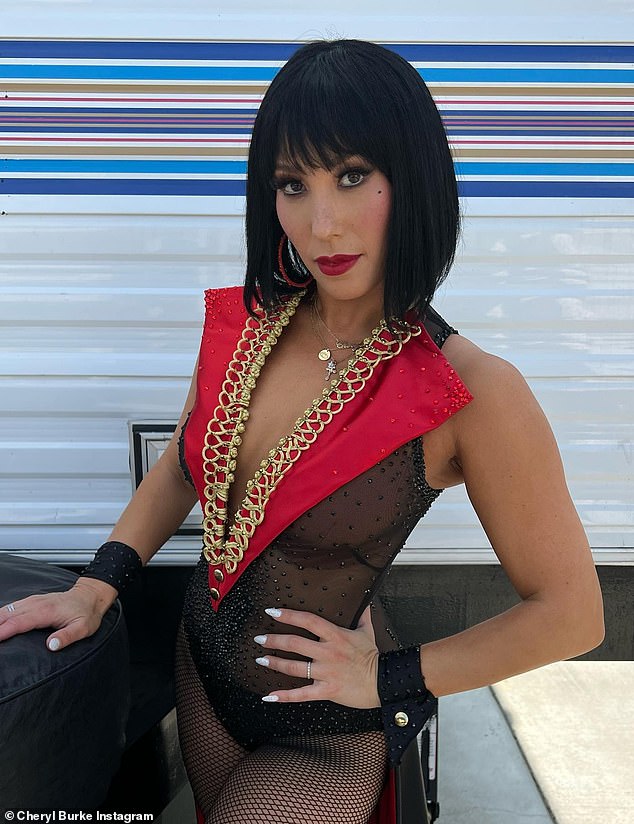 Moving on: Cheryl Burke, 38, announced her retirement as a dance pro on Dancing With The Stars in an Instagram post on Sunday, November 20

Burke went on to call DWTS her ‘2nd family since I was 21 years old,’ and that ‘The cast, crew & fans have seen me through my highest highs & some of my lowest lows, & I honestly don’t know who I would be today without them.’

She expressed her confidence in knowing that this is the right time for her to ‘begin the next phase of my career, although dance will always be a part of me.’

‘I am excited about the idea of evolving, about being challenged in new ways, having the ability to expand my commitment to mental health advocacy, focusing on my new found love for podcasting, & I’m ready to face the uncertainty (though it’s scary as sh**) of what the future holds – I do have a few things up my sleeves though, so don’t worry,’ she shared.

It’s at this point that Burke revealed she has dedicated her final dance on the show ‘to all of YOU that have supported me, loved me even if you didn’t know me, & who have been such a huge part of my life, my growth, & my story.’ 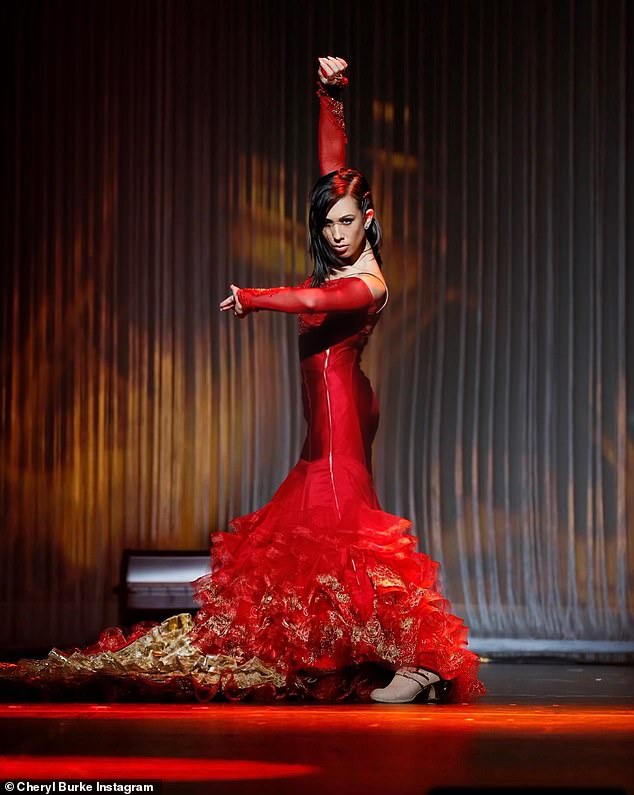 Like family: The Northern California native called DWTS her ‘2nd family since I was 21 years old’ in her announcement on Instagram 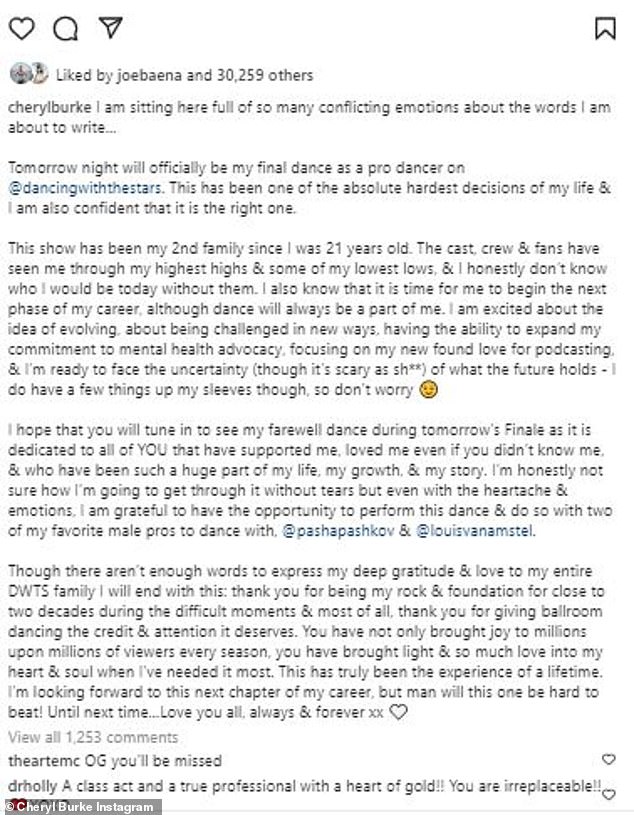 ‘I’m honestly not sure how I’m going to get through it without tears but even with the heartache & emotions, I am grateful to have the opportunity to perform this dance & do so with two of my favorite male pros to dance with, @pashapashkov & @louisvanamstel,” she said of her final dance on DWTS.

Burke ended her DWTS retirement announcement by sharing some sweet sentiments for her colleagues that have becomes her friends over these past 16 years.

‘Though there aren’t enough words to express my deep gratitude & love to my entire DWTS family I will end with this: thank you for being my rock & foundation for close to two decades during the difficult moments & most of all, thank you for giving ballroom dancing the credit & attention it deserves. You have not only brought joy to millions upon millions of viewers every season, you have brought light & so much love into my heart & soul when I’ve needed it most. This has truly been the experience of a lifetime. I’m looking forward to this next chapter of my career, but man will this one be hard to beat! Until next time…Love you all, always & forever.’

In all, Burke has competed in 26 seasons that spans the course of more than 16 years, all while taking off three seasons during her run on the show.

She had an incredible start right out of the gate, winning her first mirror ball with 98 Degrees member Drew Lachey in the second season, which was her first on the show.

And then followed that up by winning her second championship with retired football star Emmitt Smith in the third season. 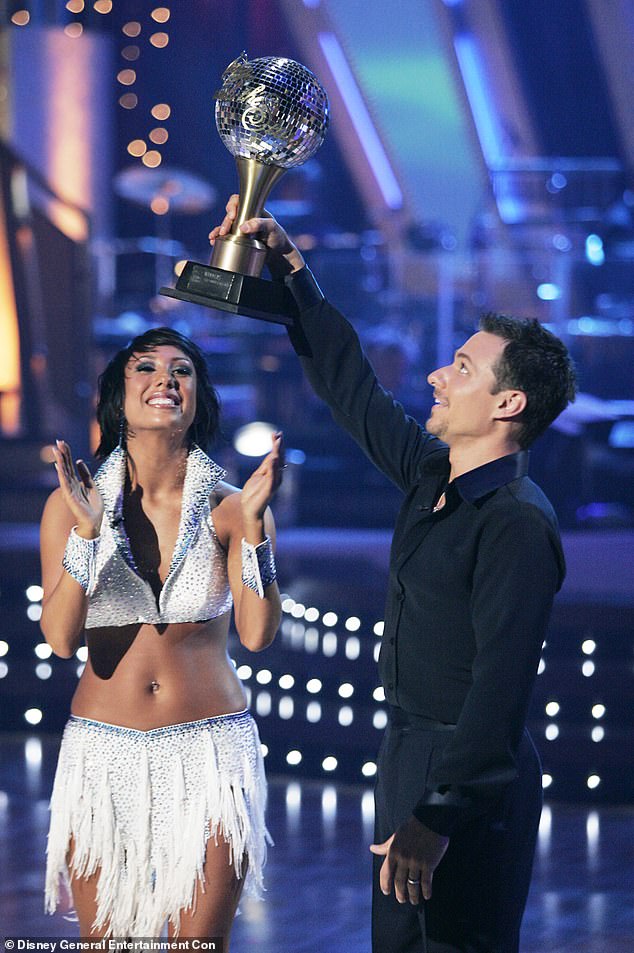 Champion out of the gate: The dance pro won the mirror ball in her first season on DWTS, in season two in 2006, dancing with 98 Degrees star Drew Lachey 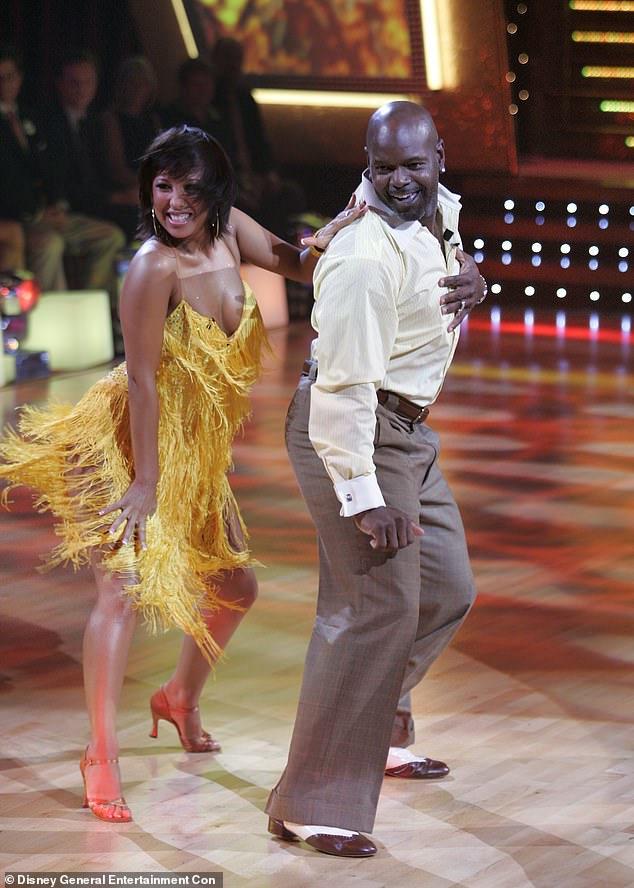 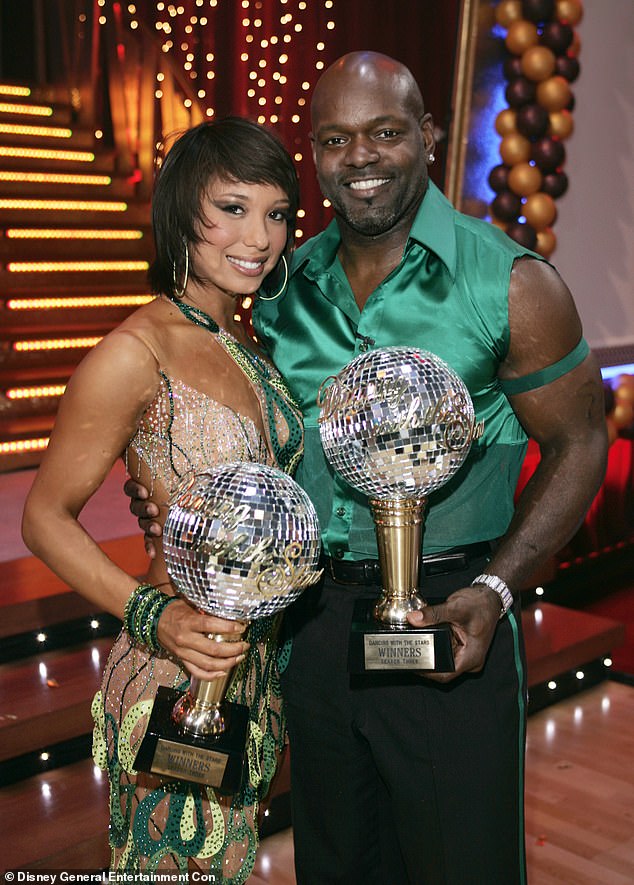 Most recently, the Burke In The Game podcast host partnered with Sam Champion in Season 31 but was eliminated from competition in the third week.

In an interview with Variety, Burke went into more detail about what sparked her decision to retire from competition as a dance pro.

‘If I were to just talk as an athlete, a dancer and a woman, my time has been up. I’m 38 years old. When I came on as a competitive dancer at 21, It was a different story. That decision in itself was really tough for me — to put everything aside, to come [to Los Angeles] and do a TV show that I had no clue was gonna last for this long,’ she explained.

After expressing her need ‘to continue to evolve’, Burke reiterated her desire to want to be a judge on the show, which has an opening now that Len Goodman has made the decision to leave to spend more time with his family in the UK.

‘They are very well aware that I want that seat. It’s not that I just want it, I just know that I can contribute because I am an expert in ballroom dancing. I can say that with confidence,’ she began, when making her case for the position. 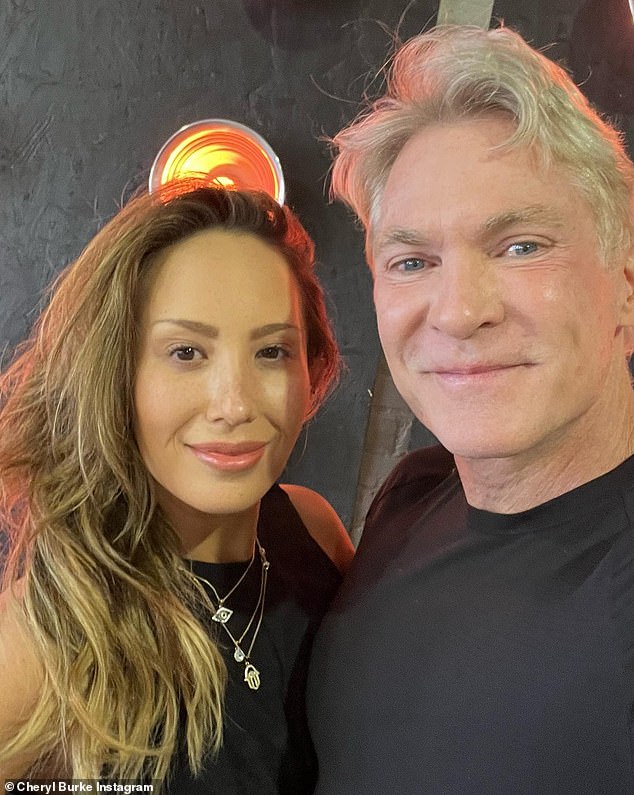 Last Hurrah: Most recently, the Burke partnered with Sam Champion in Season 31 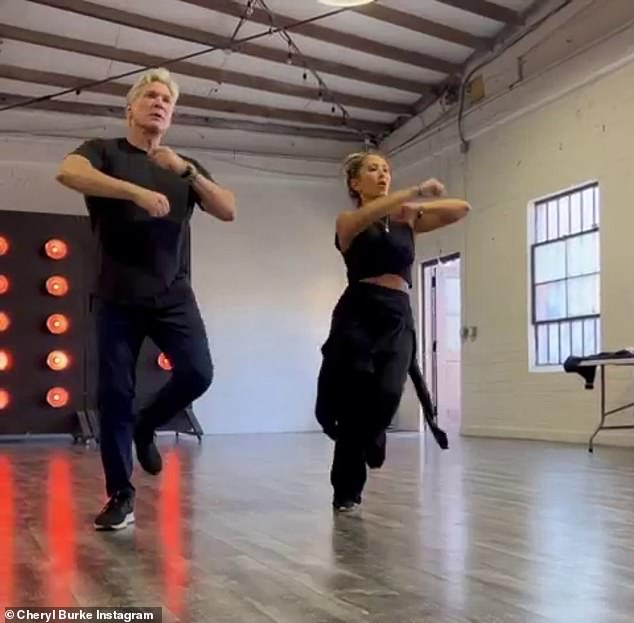 Out: Burke and Champion were eliminated from season 31 competition in the third week

She went on the describe her style of judging and critiquing as similar to Goodman’s.

‘Len is really technical and really tells you how it is. That is my style. It would be nice to see two women on the panel,’ she explained.

Burke then revealed that producers on the show have been aware of her desire to move to the judge’s panel for a few years.

‘I would love to still be a part of the family, I just would love a different role on the show, just like anybody after 26 seasons of having that same title,’ she said, before adding, ‘let’s grow together as a brand and also for me as a person. If that’s not with the show, then I’m moving forward and I’m moving on.’

Along with her duties as a podcaster on Pretty Messed Up with AJ McLean and Rene Elizondo Jr. and Burke In The Game, Burke also revealed she may be joining another popular show in a new capacity.

‘There’s also another opportunity for me to be a part of a show that is very popular, but I can’t say more because nothing has been signed yet,’ she said.

Fans can see Burke’s last dance on Dancing With The Stars when the season 31 finale airs on Disney+ on Monday, November 21 at 8 p.m. 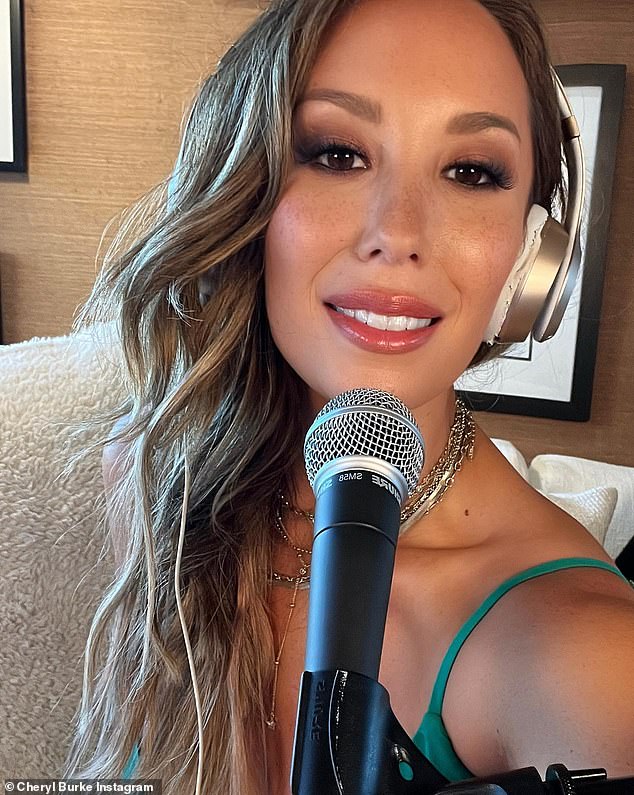 New opportunities: Along with her duties as a podcaster on Pretty Messed Up with AJ McLean and Rene Elizondo Jr. and Burke In The Game, Burke also revealed she may be joining another popular show in a new capacity

What is the Low FODMAP Diet?

How to Choose a Talisman by Date of Birth

How To Wear Contact Lenses Correctly? Dos And Dont’s

What is the Low FODMAP Diet?